“The future depends on the outcome of the climate summit in Glasgow,” said Oslo city councilor Raymond Johansen when he welcomed representatives from business, government, academia, diplomacy and the media to the Bellona meeting on COP26 at Oslo City Hall on Wednesday.

In collaboration with the Sahara Forest Project (SFP), Bellona brought together partners and key players to discuss their expectations for the all-important Glasgow summit. Bellona will host a pavilion in the “blue zone” of COP26, located inside the negotiation area. The partners of the Bellona pavilion – which is Norway’s only blue zone pavilion – are Aker Horizons, the Ministry of Foreign Affairs, the Municipality of Oslo, the Research Council, Widerøe and SINTEF.

“We have a demanding task ahead of us,” Johansen said in his opening speech at town hall. “Oslo is a very small city, but our ambition is to be a city that takes the lead and shows the way.” He mentioned, among other things, the work that Oslo has done with zero-emission construction sites. 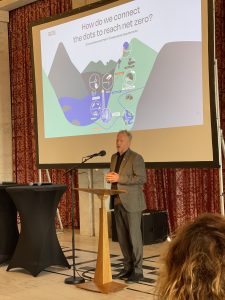 The host country of COP26, Great Britain, was also present at the meeting at Oslo City Hall, represented by the British Ambassador to Norway, Richard Wood. Italian Ambassador Alberto Colella was also present. Italy, along with the United Kingdom, holds the presidency of COP26.

Wood stressed in his speech that new commitments must be made in Glasgow and that COP26 is the last chance to save the planet from severe climate change. Colella said it was essential that all countries negotiating in Glasgow show a willingness to compromise at COP26.

Must be solution oriented

Foreign Ministry Director General Georg Børsting, who has a long career as a negotiator at United Nations climate conferences, explained why the climate summit is important for Norway and for our position in the world. Norwegian chief negotiator Henrik Hallgrim Eriksen of the Ministry of Climate and Environment, who recently returned from the pre-COP event in Milan, gave status inside the negotiations just under three weeks before the kick off in Glasgow.

Bellona founder Frédéric Hauge attended the very first climate and environment summit under UN auspices in Rio de Janeiro in 1992 and has a long career in UN summits on the weather. He says COP26 is the most important climate summit of our time.

The Director of Sustainable Development, Jeanett Bergan of Aker Horizons, explained why a major industrial player like Aker is investing in a presence at COP26.

Fourth to 50 gigatons of CO2 are still emitted each year in the world, and this has to stop, ”Bergan said. “All countries are now feeling the effects of global warming. The pandemic has shown how quickly the global community can turn around when we need to. We are going to Glasgow to present solutions.

SFP Director General Kjetil Stake highlighted how COP26 could play a role in desert areas around the world.

“We need a radical change in the way we produce food, and our desert project in Jordan is a living example of ambition in the fight against the climate,” he said. “The more vegetables we consume from our desert plant, the less CO2 there is in the atmosphere.”

Andreas Kollbye Aks, director of strategic development at Widerøe, said Widerøe will travel to Glasgow to talk about electric planes, and revealed that the first electric aircraft for commercial traffic will likely be in flight by 2026.

Nils Røkke, sustainability director at SINTEF, said there is a big difference between what has been done so far and what needs to be done now to achieve a zero emissions society.

“There are important technologies that need to be developed,” said Røkke. “We need to redouble our efforts in research and innovation, and we are going to Glasgow with concrete examples,

Next We stand in solidarity with the workers of the Kellogg TV and Film Union, UAW and IATSE